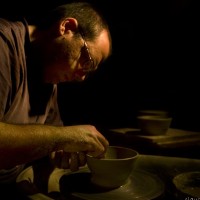 Born in 1974, I graduated in Art Education from the University of Malta in 1996 and immediately took up ceramic studies under Julie Apap. I have now been potting ever since and have no intention of stopping!

My artistic development is grounded in artistic discipline and my degree in Art Education has reinforced this notion. I have studied design, colour, composition, history of art and have worked with various media. I firmly believe that, at least in so far as the arts are concerned, one must first know the rules, and know them well for the matter, before making any attempt to break them. My artistic training in general has supported and still supports my development as a ceramic artist.

At first I focused on mastering the potter’s wheel, which takes a bit more than what the average person thinks. Working mainly in stoneware clay I have a predilection for wide open forms, bowls and platters but have also “thrown” bottles, teapots and other shapes just for the sake of the technical challenge that they offer. The throwing process is a sublime form of meditation during which wheel, clay, body and mind become one and are projected to a higher level of being. The wheel remains my passion but over the years I started exploring other forms of expression in clay. In particular I have been working with slabs and wall hanging pieces.

In 2004 I was invited to participate in a ceramics symposium held in Serbia. Working alongside ceramic artists from around the world proved to be a turning point in my career. A new found impetus to create culminated in my debut exhibition held at Del Borgo, Vittoriosa in 2006. I have since participated in numerous exhibitions and my work is now represented in various public and private collections in Malta, Spain, Serbia, Croatia, England, Greece, France, Ireland and Italy amongst others. Some of my pieces have even travelled as far as Alaska.

In 2007 I set up my own studio. This provided me with the space to experiment with different clays and to research glazes, mulling over textural qualities, colour, composition and my development as an artist in general. Changing to earthenware clay and consequently lowering the firing temperature of my work has been a conscious decision on my part, bearing in mind the environmental impact of each firing. This provided considerable challenges, particularly in terms of my glaze palette. The experimentation that ensued as a result is fuelling my technical growth as a ceramic artist.

My most recent work reveals a continued fascination with landscape and natural rock formations and an innate interest in line, intricate textural qualities and rich Mediterranean colours. Each work stems from a specific idea that is combined to my visual and personal experiences and the possibilities that the clay offers to create something that is essentially unique and beautiful.